Guess what? It’s the morning golden hour and I’m drinking coffee. Coffee should be a theme of these posts. It’s the middle of December, just a few days to Christmas, and I’m forcing myself to slow down and get into the mindset of the holidays. This winter is quite special. Gabby, my wife, graduated college.

Gabby’s collegiate efforts first began at the University of Pittsburgh where she struggled with all the things that students often struggle with. After dropping and failing classes through her first three semesters, she decided to take a break and move across the country. She worked in the coffee industry for four years where she was a barista at some of Austin’s most well known spots. I worked in coffee for a brief period, too—that’s how we met.

A year after we began dating, Gabby decided to take her first class at Austin Community College. She slowly ramped up her workload. 3 hours in the Summer of 2015, 6 hours Fall 2015, 9 hours Spring 2016, 6 hours Summer 2016. Gabby transferred to Texas State University in Fall 2016 and took another 12 hours that semester. She averaged 33 hours per year at Texas State for 2017 and 2018. We even got married in the spring of 2017 while she was working part time as a writer. Throughout this process she had multiple internships, freelancing gigs, and picked up shifts at our friend’s coffee shop. No step of this was easy or effortless, but she made it seem so. 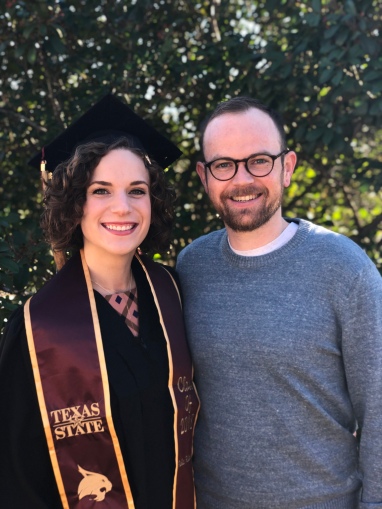 What was the main reason college was hard the first time?

It was two things. First, I lacked preparedness. Going to college requires a lot of skills. I was definitely smart. That isn’t the issue. I lacked the personal and work ethic skills that it takes to excel in college. Being out of school for so long and taking the path of getting back into it gradually taught me a lot of the skills that I lacked. It allowed me to explore how I can be successful. The second thing is that I don’t think I was studying the right subjects. Originally, my major at University of Pittsburgh was English Writing. I still love writing and it’s a huge part of who I am. I’m grateful for those classes—they were even some of the courses I did really well in. But those classes lacked the professional development that I needed. I think I could have been a writing major at Texas State and done fine, but after being out of school for a few years, I realized I needed something more connected to a professional track. When I was in college the first time, I had little concept of what was next. I also had little foresight about my own future, which probably connects to a maturity issue at the time. But taking a step back from school to allow myself to grow outside of an academic setting allowed me to prepare myself for reentry to an academic setting. Confidence was key. The first time I went to college, I lacked confidence to the point that if I thought about raising my hand to share a correct answer, my hands would shake and I wouldn’t raise my hand. It was really frustrating and discouraging. I would get low participation scores even though I felt engaged. I definitely had imposter syndrome and it was easier to skip classes and avoid confronting the issues.

What would you say was the initial challenge of going back to school as an adult?

Definitely regaining my confidence. When I was in school the first time, I knew I was capable, but lacked the confidence to forge ahead, make mistakes, and accept the things that come with learning. There is a lot of humility that students need to have. I am admittedly a perfectionist and that enabled me to finally graduate with a 4.0, but I had to be open to making mistakes along the way. Being humble in a learning environment helped me with that transition.

What is a challenge of being a full-time, nontraditional adult student?

There were so many bureaucratic hurdles I had to jump to even get into Texas State. This is why schools oriented around access for transfer students are so valuable. When I first started classes, I was enthusiastic, engaged, had a home, two dogs, and had a part time job. I had a lot going on that many traditional students don’t have yet. The challenge of juggling those challenges with being a full time student made me even more motivated. It made every win more meaningful. I’m fighting for something now. Having the support of Texas State really helped me in my journey.

What was something that Texas State did for you to help you finish?

The path from advising to instruction to being able to track my path to graduation helped me because I thrive in environments that are consistent and cohesive. I know Texas State works really hard to make sure students have access to advisors and can see the same one every time they go. The faculty in the SJMC program also worked to build lasting relationships so they could help you with your career outside of the classroom. The program I graduated from was a special one and I think it has the respect of the entire university for what it does.

What do you think would have made you successful when you attended college the “first time”?

That’s hard to say. I think it would have been better for me to not have gone the first time. Now I have student loans for something that went nowhere. I went to a great university to start and I wasn’t ready to accept the fact that I simply wasn’t prepared. I don’t think I was even ready to accept it until I went back the second time. It’s a hard thing to accept. I think the definition of college readiness is very abstract, and the ‘system’ is there to help students believe they are always college ready. I simply don’t believe that’s true. I had tons of support at my first university. I had access to healthcare, coaches, therapists, professors who helped me get through academic probation. So I really don’t know what could have been different, except that I shouldn’t have gone.

What advice would give to traditional students who think they aren’t ready?

Stay humble and know there are many paths to graduation. A traditional four year path isn’t for everyone. I totally benefited from taking a break. It’s ok to take a step back if you need the break. If you do take a break, be productive. Get a job. Get experience. If you aren’t sure yet about taking a break, talk to people. Talk to as many people as you can. Talk to advisors and people who know you. Get unbiased advice. One of the most important things is opening yourself up to those conversations. In my head initially, it was a major failure to leave school, but now that I’m on the other side, it was exactly what I needed.

What advice would you give an adult who is considering going back to school?

All prospective non-traditional students are coming from different backgrounds so that’s difficult to answer. I would say, it’s worth it. It’s hard. While the students are mostly younger than you, you’re still there for a common experience. Be patient. The time will really fly and you’ll be walking the stage before you know it. When I first started at Texas State as a nontraditional student I was frustrated with my classmates and the gap in engagement. They just didn’t take things seriously. Student apathy was (and still is) a big deal. Being too cool for school was definitely a thing in those classes. Something I realized later on about that mentality is that most of those students were like me the first time I went to college. Many were afraid to raise their hand, and would get quietly frustrated when they knew the right answer but didn’t speak up. Being a nontraditional student allowed me to move past the fear of not being right. I realize I’m in class to learn and find out where I’m wrong. As you get into the higher level courses, nontraditional students can be comforted with the fact that your peers are just as motivated and driven as you are. Being surrounded by people who have a common end goal of graduation means you can inspire each other, even if their experiences are different or they are younger than you or if they don’t have the same household responsibilities.

2019 is going to be interesting because for the past 3 years, 100% of every day was about education. Home and work carried the same themes. Gabby and I were asking the same questions. What can we do to help students get through school? What are the institutional barriers that we created that are harmful? What types of psychology do we need to understand to instill grit and growth mindset in struggling students? What are the early signals we can find to tip us off to a problem and better yet, which types of problems are actionable? Which questions even have answers? I’ll be back in my office January 3rd and hopefully my data scientists will have figured it out.